On Saturday, June 15, the Eastside Community Network provided an enjoyable, interesting and fun tour touching on many of the eastside development projects in which

ECN played a role. Donna Giv- ens, President, and Orlando Bailey, Chief Development Officer, served as our primary tour guides with volunteers from various eastside neighborhoods providing additional narrative. We began the evening at Steve Hood’s lovely home on the Scripps Street canal with wine and a lovely variety of hors d’ouvres. Participants came from our local neighborhoods as well as through- out the Metro Detroit area. Among the stops was seeing first-hand the Manistique Community Garden, fu- ture space for the Tree House proj- ect, Detroit Abloom’s gardens and gazebo and learning about plans for a Dog Park w/Tammy Black vividly describing all of the positive things happening with the Manistique Block Club. We then heard from Miss Myrtle who is director for a youth mentoring program in Jeff/ Chalmers focusing on the arts. An outdoor festival is planned for July 4th featuring the art of previously incarcerated individuals – giving them a showcase to feature their work. We drove by Norma G’s Caribbean Cuisine restaurant and heard about the great food featured as well as the owner, Lester Gouvia. Norma G’s is the first sit-down res- taurant to open in the neighborhood in thirty years and has been well- received for its unique menu.

From there we headed to West Vil- lage. Detroit Vegan Soul and Red Hook Coffee café are both located  on Agnes Street thanks to the efforts of ECN helping to regenerate the building’s purpose. Gabriel Hall is a new restaurant scheduled to open later this year and the enthusiastic owner was on the tour. Donna and Orlando provided rave reviews based on catering that she had done for an ECN meeting. Art installation at Concord/Kercheval was next with a lively discussion about the status and future of side lot sales. We then met Miss Edith at Mack Commons and learned that Mack Avenue Community Church and ECN had been instrumental in putting this unique concept – laundramat and coffee shop – together, based on community input. All of the food served at the café is prepared by local residents. We learned about the Mack Alive Arts Program in the northwest corner of the LEAP (Low- er Eastside Action Plan) District.

We saw the historic Dr. Ossian Sweet’s home and learned about the renovation plans for this building so vital to Detroit’s history. An historic plaque designates the location.

Then on to the site of the South- eastern High School on St Jean near the FCA project, thru Chandler Park and all its amenities ~ golf course, tennis courts, Aqua Center, rugby and soccer fields and the beautiful Matilda Wilson Flower Gardens.

We visited the Hamilton Rain Water Garden and learned of its role in educating students as well as serving as a community gathering spot. Our final stop was the Mack Avenue Business/Retail Shopping Center and learned how this retail facility came to be – stock pur- chased for $25/share by residential stakeholders. A true “community” investment!

This was such a well organized
and fun evening, and I recommend participating in future tours offered by ECN. It was apparent that much thought and planning went into this event. There is a nominal $10 fee but the positive information and energy exuded was priceless! Can’t wait to sign up for the next one! 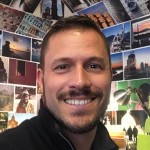